Skip to content
Home » Periodic Posts » SteveG's Posts » How to Talk About Debt and Deficits: Don’t Think of an Elephant*

I think it is time to start talking about what is in this New Economic Perspectives article, How to Talk About Debt and Deficits: Don’t Think of an Elephant*

Here is a quote from a report prepared for publication by the St. Louis Federal Reserve that makes the point that we all need to understand: 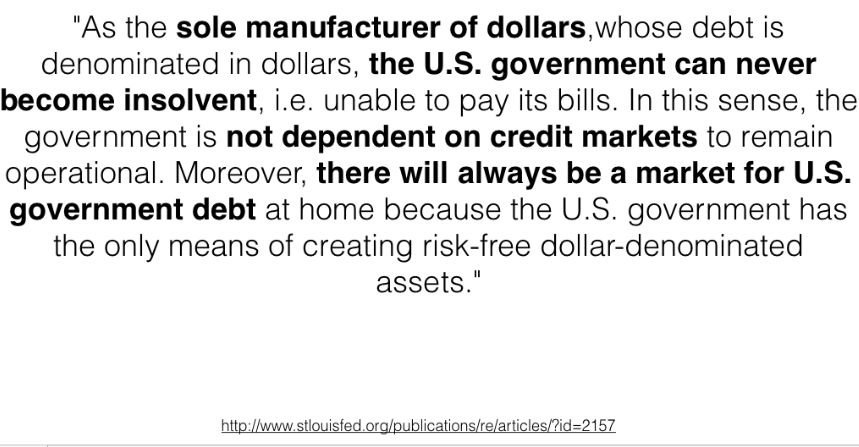 The article even has a link to a YouTube video of Alan Greenspan making a similar point.

There is nothing to prevent the federal government from creating as much money as it wants to make.

To grasp the import of Alan Greenspan’s confession, it may help to read my previous post, Fractional Reserve Banking Mechanics. In my ordinary bank example, I said that the bank gave the borrower some physical bills. This was just so that you could keep track of the physical bills and see that they actually existed somewhere to cover what each person thought they had. The bank could just as easily have credited the borrower some money in his or her checking account. If the borrower then gave a check for the money to someone in order to buy something, the seller could have deposited the check in the business’s bank account. The banking system would be happy to tell the business that it had added the money to its account, all by transferring the idea of who had the money electronically. No physical bills need ever change hands.

If you grasp how a plain old bank manages to create money essentially from nothing, then you can see how much easier it is for the Federal Government to create its own money. With the advent of electronic transfer of “money”, the Federal Government does not even have to physically print money. All it has to do is electronically credit someone with the money. As long as almost everybody believes the money is there, and that the money people think they have will actually buy what they expect it to (and experience confirms their assumptions), then the system runs quite well.

If you have not thought of this before, you may be able to think of lots of circumstances where the creation of such money could become a problem. However, only some of the scenarios you come up with will be actual problems. Other problems just resolve themselves if you think about the reality hard enough, or you have someone explain to you how it resolves.

To make rational decisions, you really have to figure out which ones are the real problems, and which ones are just ghosts of your lack of familiarity with how money actually works on a large scale.

When even President Obama goes along with the fiction that we have a current debt problem, it is time to start getting seriously educated on what is and what isn’t a problem. Hint: The current debt is not the problem. The future debt from uncontrolled health care costs is the problem whether it is debt from the Government or debt from private individuals. (Read the report that is linked to Greenspan’s remarks above).

It is a real danger when the President gives up trying to educate the public, and thinks he can just harness public ignorance for his own benefit. It is guaranteed to blow up in his face, just as it has many times in his Presidency already.

How to Talk About Debt and Deficits: Don’t Think of an Elephant*, is really just the beginning of an understanding of this whole topic.