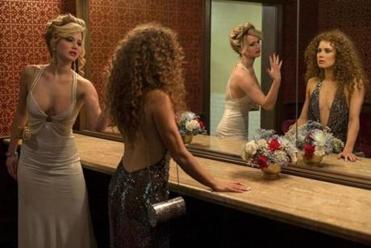 AMERICAN HUSTLE This is the movie that reminded the world that Halston was no joke, and all the free love and cocaine circulating in the late 1970s seeped rather blatantly into the minds of fashion designers. Amy Adams is a one-woman fashion show in this film, while Jennifer Lawrence showed the world that a 1970s stay-at-home mom with a botched home tan could also be sexy.

This picture brings to mind a recent Facebook conversation that I had about going to see the movie.

Steve G – Well. I thought the good parts were on display. Maybe that’s not what you meant 🙂

At the time of this conversation, I  didn’t have the above still from the movie to show what I meant.