MoveOn.org is has a petition campaign over the War Veteran Wounded By Police At Occupy Oakland, Stun Grenade Thrown At Folks Helping Him.

They introduced the video below with the following explanation:

Scott Olsen, a protester who’s done two tours of duty in Iraq and is now involved in Veterans For Peace, was critically wounded during an Oakland police raid by police projectiles. When people tried to help him, an officer lobbed a flash bang grenade right into their group. Olsen is currently hospitalized with serious injuries and is reported to be in critical condition.

The text of the petition that you can sign at MoveOn.org is as follows:

Mayor Quan: We are outraged by your decision to have Occupy Oakland’s peaceful, lawful and inspiring assembly raided. We denounce police intimidation, harassment, and incarceration of peaceful protesters.

We call on you to drop all the charges against these community leaders, to release them immediately, and to allow for the restoration of the encampment.

To underdstand the need for the lethal violence of the police, you can read the story Mayor Quan issues statement about Occupy Oakland raid.

In part she said:

Many Oaklanders support the goals of the national Occupy Wall Street movement. We maintained daily communication with the protest0rs in Oakland.

However, over the last week it was apparent that neither the demonstrators nor the City could maintain safe or sanitary conditions, or control the ongoing vandalism. Frank Ogawa Plaza will continue to be open as a free speech area from 6 am to 10 pm.

In order to maintain safe and sanitary conditions is killing a demonstrator justified? Exactly what kind of vandalism does she imagine? Enough to kill over? Maybe this is like what we heard about the Viet Nam war where our Army had to destroy villages in order to save them.

Having participated in some of the Activities of Occupy Boston and Occupy Worcester, I know that the demonstrators were fully aware of what might be the reaction of the power structure they were challenging. The fact that they were willing to continue in the face of this knowledge is a tribute to their courage. The irony of a Marine Vet surviving several tours of duty in Iraq only to have his skull fractured while petitioning his own government for redress of grievances is almost beyond belief.

He has to define the tax rate he is using as tax rate on their income after necessities are paid.  I always have thought of that as the fairest way to assess taxes if you could find a way to define necessities.

His pie charts from the extreme ends of the earnings spectrum give you the best summary along with a paragraph close to the end of the article. 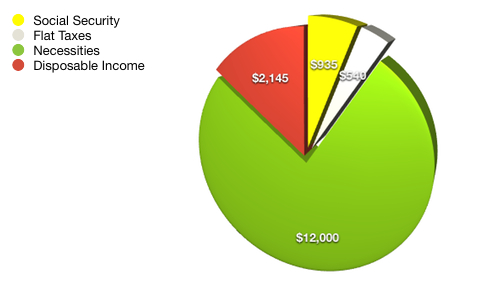 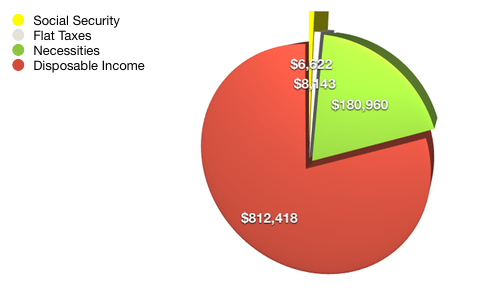 My first rection to seeing the article title Why the Left Won’t Accept Success was, “What success?”  However, I clicked through and read on.

It appears that some don’t want to accept that the anti-war movement has won a hard-fought victory and that Obama’s election was a factor. It’s almost as if the fact that something has been achieved through the deeply flawed U.S. political system threatens a preferred political analysis, which holds that nothing good can happen.

Like Kennedy, Obama has faced a steep learning curve as president and has made his share of mistakes. But his completion of the U.S. withdrawal from Iraq and his timetable for phasing out a U.S. combat role in Afghanistan by 2014 suggest that he is following a JFK-like trajectory.

Except this time, what might reverse the course of history would be Obama’s electoral defeat in 2012. Republican front-runners, including Mitt Romney and Rick Perry, have made clear that they would again pursue a muscular neocon agenda with higher military spending and insistence on U.S. global dominance.

There is still plenty of time for Obama to inspire me to work for him as much as I did the last time.  If he fails to do that, then Romney, Cain, or whoever the Republicans choose might inspire me to work hard for Obama.  With Elizabeth Warren added to the Senate to push Obama in his second term, we might see a better term than the first one.

If Senate Minority Leader Mitch McConnell doesn’t want to be portrayed as a “villain,” he should stop acting like one. On Sunday, McConnell complained about President Obama’s efforts to make Republicans the bad guys for blocking his jobs bill. Now Obama’s taking the fight directly to McConnell, and it’s about time.

The video has an interview with the Joan Walsh, the author of the article.

As a previous post shows, I do not believe in fairies, but I can still be captured by a good fairy tale. So maybe this fight is the face of the real, new Barack Obama.


“So, he might actually just believe that. That may be just the sad, sad part about Barack Obama, that not that he’s too timid or that he’s too compromising, but he actually believes in a lot of what they believe in. I hate to say that.”

Michael Moore is coming around to a horrible thought that I have entertained. In July, I posted Barack Herbert Hoover Obama.

As I have been surmising, President Obama cannot forcefully stand up for the right economic policy for today because he believes in the wrong one himself. My thesis is that Obama’s mind has been poisoned by the remnants of Milton Friedman that still reside in the University of Chicago where Obama was a professor.