The White House said Sunday it had “very little doubt” that the Syrian government was responsible for the assault that killed hundreds of civilians, as U.N. inspectors prepared to access the Damascus suburb where the purported nerve gas attack took place on Monday.

But a senior Obama administration official treated the Syrian decision with skepticism, saying it was “too late to be credible.”

“If the Syrian government had nothing to hide and wanted to prove to the world that it had not used chemical weapons in this incident, it would have ceased its attacks on the area and granted immediate access to the UN – five days ago,” the official said on condition of anonymity.

I have been hearing what I would call knee-jerk reactions to the opening of the Aljazeeera America cable network.  People have been voicing what I assume is their assumption that a non-Israeli source from the middle east could not possibly do even-handed reporting.  You can read the above article to see for yourself what you think.  Do you think Faux Noise would have reported it as well?  What do you think the Arab population thinks about Americans who get their news from Faux Noise? What do you think about handling of this story by Israeli news sources?  Do not assume you know how I would answer the previous questions.  They are not rhetorical, but something worth thinking about.

Speaking to a crowd of Kentucky voters at a fundraising breakfast, Beshear took the opportunity to praise the Affordable Care Act (also known as Obamacare) to the overwhelming support of the audience and take subtle jabs at those who were opposing Obamacare, which include Senators Mitch McConnell and Rand Paul who were also attending.

Beshear finished with a stab to the heart of GOP’s NoCare, no alternative. “It’s amazing to me how people who are pouring time and money and energy into trying to repeal the Affordable Care Act sure haven’t put that kind of energy into trying to improve the health of Kentuckians,” according to the National Journal.

I more Democrats got out there and spoke up, the Presiden wouldn’t have to be the only one trying to get the truth out.

I noticed today that on the NBC news, while we have a Democrat as President and the Senate majority is Democratic, the foreign policy experts they had on telling us how our government should and would behave in Syria were Republicans.
For a left leaning media, they sure give Republicans more coverage than they deserve. Senator Corker of Tennessee isn’t even noted for his foreign policy expertise and NBC was reporting on his appearance on Faux Noise. Surely the head of the Senate Foreign Relations committee, a Democrat, could have been featured on one of the three real networks.

New Economic Perspectives has the post Bullet-Pointing the Big Bank Bamboozlement by Dan Kervick.  I have said before on this blog that there are usually many economic forces pulling on the economy, but the trick is to figure out what forces are dominating at any given time and what forces are so small that they can be ignored for the time being.

I liked this article because it mentioned a number of forces that I had never considered.  I’ll quote a few of the bullet points on only the topic of low interest rates.  For the rest, you’ll have to read the article itself.

But at this point, does anybody really know what central bank policy would actually be most conducive to getting back to trend growth? Let’s run it down, PowerPoint style, shall we?

I knew I was going to make a post about these ideas because of the reasons mentioned above even before I saw this last throw-away bullet point.

Oh, and one other random point to note:

Shortly after I posted the cartoon in the previous post Handy comparison chart: Janet Yellen vs. Larry Summers, I read the letters to editor in The Boston Globe.

The letters were Comparison of Bulger, Summers was insensitive, not clever and Cartoon crossed the line.

Here is the cartoon in question: 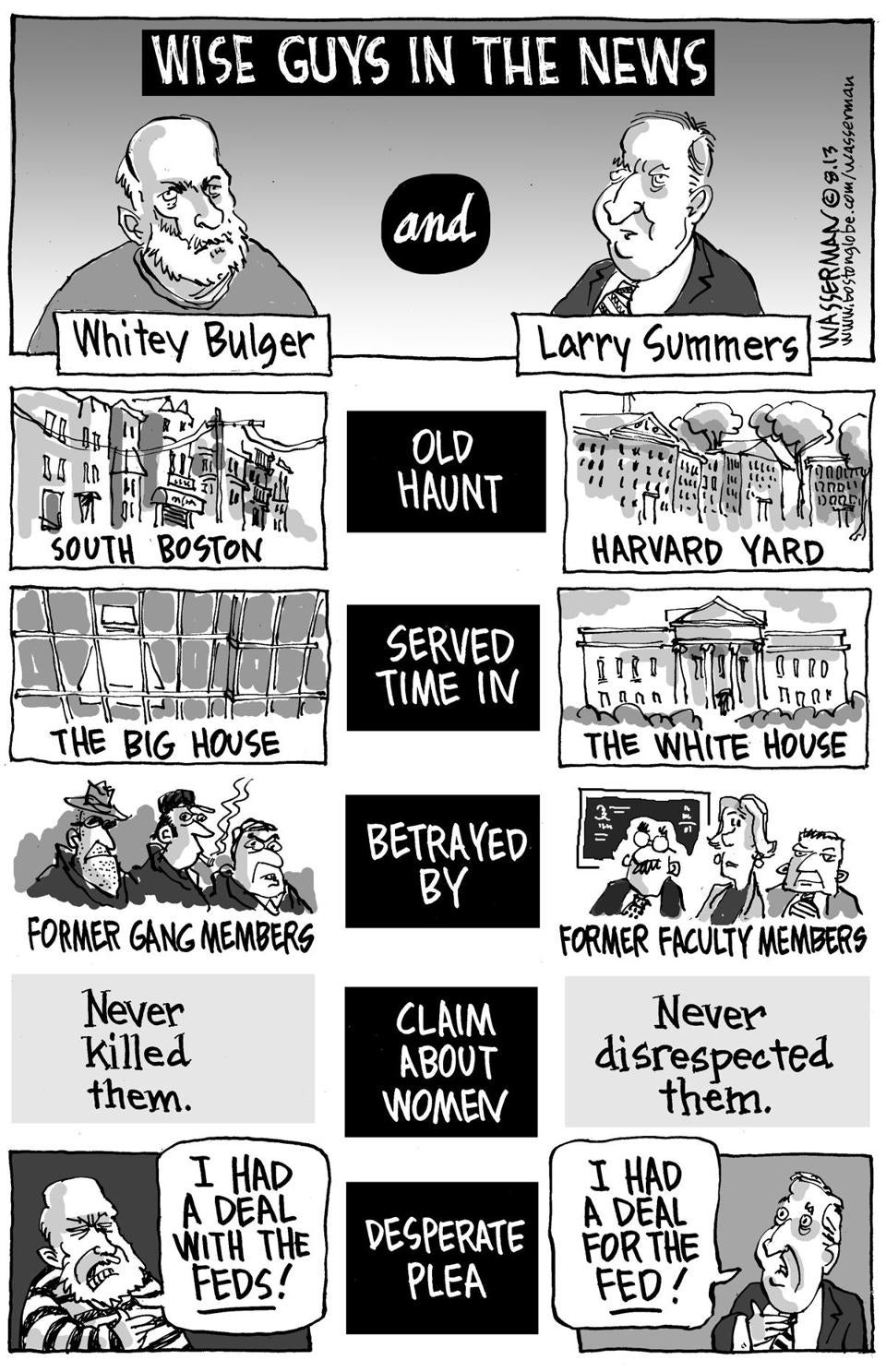 The sad part of it is that these letter writers do not understand how appropriate the cartoon is. If you measure the total pain inflicted on the world, Larry Summers may have Whitey Bulger beat by orders of magnitude. In our society we don’t seem to understand the damage white collar crime does.

What does the press have to do to get people to see the problem? Neither serious articles nor cartoons seem to be reaching people.

It’s the simple unfairness of of having to work so much harder to reach the top, and if you do, you’re seen as the “gendered” pick. It’s symbolic of every time a highly-qualified woman hits the glass ceiling when forced to compete with a loud, arrogant blowhard with a strong sense of self-entitlement and undeserved mystique of greatness.

Since I have not written enough on this topic lately, I leave you with this cartoon that the article used.