The UK Guardian has the article Tech firms begin ‘go-slow’ protest in battle for the web. 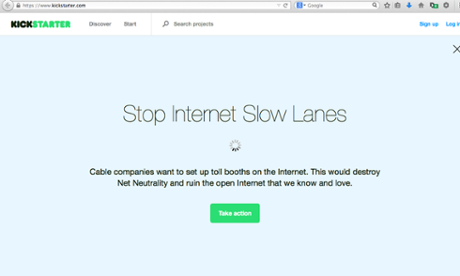 Kickstarter on Wednesday morning made its point on how new rules would ‘destroy net neutrality’.

Much of the internet went on a “go-slow” protest Wednesday as some of the world’s largest tech companies began a protest over proposals that could create fast web lanes for some companies.

When asked what it’s going to take to change the way the country (and world) is headed toward complete oligarchy, recent gubernatorial candidate Don Berwick pinned his hopes on muckraking independent journalists.

For the oligarchy to sustain itself, they need to get control of this last avenue of communication. Let us not kid ourselves that this is about creating fast lanes for people willing to pay. The fastest lanes will always be as fast as technology allows. What we are talking about is putting most communicators in a special slow lane for the unwashed masses. The regular (fast) lane will be only for the information that the oligarchs want the rest of us to hear.