Naked Capitalism has the article Midterms 2014: The Red Wedding for Democrats.  Here is the best analysis of the 2014 elections that I have seen.  I knew a lot of this stuff already, and yet the article was still rather eye opening.

The midterms were not a “wave election” for Republicans, and in fact left policies were adopted by voters. The Democrats did not lose because of technical factors like the electoral map, structural issues with their “coalition,” or even for the reasons put forward by emo-dems. Rather, the midterms were a protest against neo-liberal principles and policy outcomes successfully achieved by Obama and the dominant factions of the Democratic Party: An active protest against Obama’s redistribution of income to the rich, and a sullen refusal to take ObamaCare as the positive good that the political class, refusing to look out the windows as they talk on their cellphones on the Acela, are sure that it is. Finally, Republicans are no less despised than Democrats, and in 2016 it may well be their turn to be subject to the cycle of massacre. Only a cat of a different coat….

This is a wake up call for progressives.  We need to understand that we may be backing the wrong horse, and the rest of the country is way ahead of us understanding this.  The right horse is not the Republicans and neither are many of the Democrats.  This is the message that we have not digested yet.

Since most of you won’t click through to the article, I guess I’ll have to put one of the charts from the article here. Are you surprised that the bottom 90% might not have appreciated what Obama did for them in the economic “expansion”? I don’t think a lot of the people I know are in the bottom 90%, so we don’t feel it quite the same way as they do.

You can squawk that Bush was the cause of the poor performance during the Obama administration, but politicians who blithely assume that everyone should feel great about the recovery is setting himself up for a big surprise.

Obama should have spent the last 6 years hammering on this issue rather than trying to fool people into congratulating him on a job well done. He should have explained exactly what needed to be done to fix the problem. Leaving the crooked financial executives free from jail to enjoy their ill gotten gains from the bank bailouts was not very convincing. By the way, corporations are not people, so jailing the bank executives is not the same as harming the banks or the financial system. In fact jailing the control fraudsters would have done more to fix the banking system than the Dodd-Frank bill did. Can you think of a politician (hint: her initials are EW) who has been hammering on this issue?

If you just saw the Boston Globe editorial cartoon, before seeing the figure above, you could feel pretty smug about the turkeys. 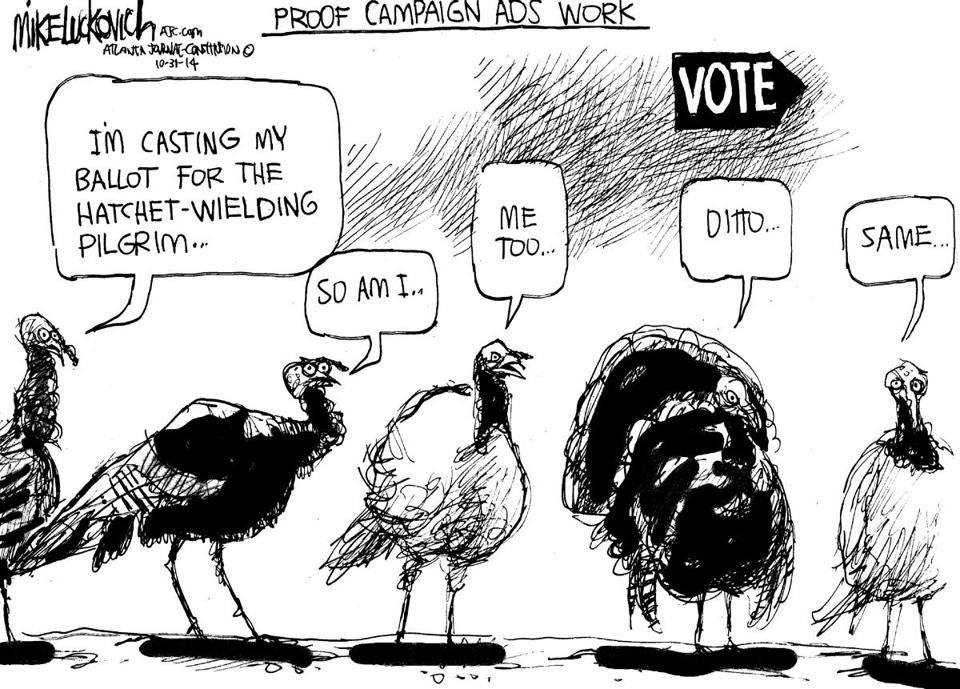 However, having seen the first image, you might wonder if the bottom 90% of the people figured one hatchet wielding pilgrim is as good as another.

2 thoughts on “Midterms 2014: The Red Wedding for Democrats”