A Facebook discussion motivated me to do some research. I found the paper The Electron and the Bit by Paul Penfield, Jr. I had Penfield as a professor in one of the courses I took in college. For a few summers, he also worked as a consultant for our group at Digital Equipment Corporation.

What brought me to this paper was an interest in nationally sponsored education initiatives. Section “IV. Engineering Science” is relevant here.

Gordon Brown, among others, realized what was wrong. The problem was that the necessary science was not known, or at least was not in a form accessible to engineers. He agreed with Dugald Jackson that engineers must be able to apply known techniques and develop new techniques using known science. But he went further, saying that at least some of them should also be able to extend the relevant sciences in ways required by engineering. Brown called such activities “engineering science.” He concluded that changes in the educational programs were needed.

In Brown’s view, the science should be taught in the first years, followed by contemporary technology based on the science. Specialization and theses would come in the senior year. The best students would be encouraged to enter an expanded doctoral program, which would produce engineers able to extend engineering science. He served on a department curriculum committee and rallied support for these views. When he became department head in 1952, he immediately instituted a curriculum review to identify the underlying sciences in all areas, and relate them to engineering techniques. Six undergraduate textbooks, called the “Green Books” after the color of their covers, were written during the late 1950s.

I was the beneficiary of this change in curriculum. More directly I benefited from the effort Penfield describes next.

The first major test of this engineering-science approach was provided by semiconductor circuits. The transistor was invented in 1947; circuit applications began in the 1950s; the integrated circuit came along in 1960. Universities had to include transistors and integrated circuits in their undergraduate programs. But how? Should devices be taught in terms of terminal characteristics or the internal physics? What if fields of science not previously thought relevant were needed? Could nonlinear circuits be covered? How much solid-state physics would be required?

MIT led the way in answering these questions. In the fall of 1960 Richard B. Adler and Campbell L. Searle organized the Semiconductor Electronics Education Committee (SEEC). By 1966, 31 people from nine universities and six companies produced seven coordinated textbooks and related curricular material, aimed at third-year and fourth-year electrical engineering students. The books featured more solid-state physics than had ever before been used in teaching electronics. In the books, semiconductor-device models were derived from the solid-state physics, and they in turn were used in transistor circuits.

SEEC was a triumph of engineering science, with a substantial, lasting impact. The basic ideas influenced many textbooks written in subsequent years. The approaches are still used in EE education throughout the world, even though the SEEC books themselves can no longer claim contemporary relevance because they were never updated to cover integrated circuits, MOS devices, or much on digital circuits.

The books listed in The MIT Semiconductor Electronics Education Committee Series were influential on my career. I still have some of the books in the series. 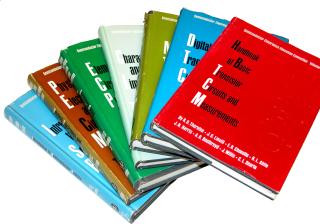 At least half of my professional career was directly related to software that simulated integrated circuits and used models of transistors that were the descendants of those described in these books. The other half of my career still involved software related to simulating integrated circuits, just not quite as intimately connected to the models of transistors.

I had a freshman adviser who tried to assure me that I didn’t have to obsess over picking a major. He said that after a few years out of college I wouldn’t be using the stuff I learned at M.I.T. anyway. How wrong he was about the use of what I learned. He was right about not obsessing over choosing a major.